My favourite landscape in the Hauraki Gulf is an island that many people pass by on their way to work or out for a day’s fishing or sailing.

It’s a really special place with an unusual history and some unique geology. It had a flare up in November last year but now with its kikuyu cloak back you wouldn’t know. Have you figured it out yet? 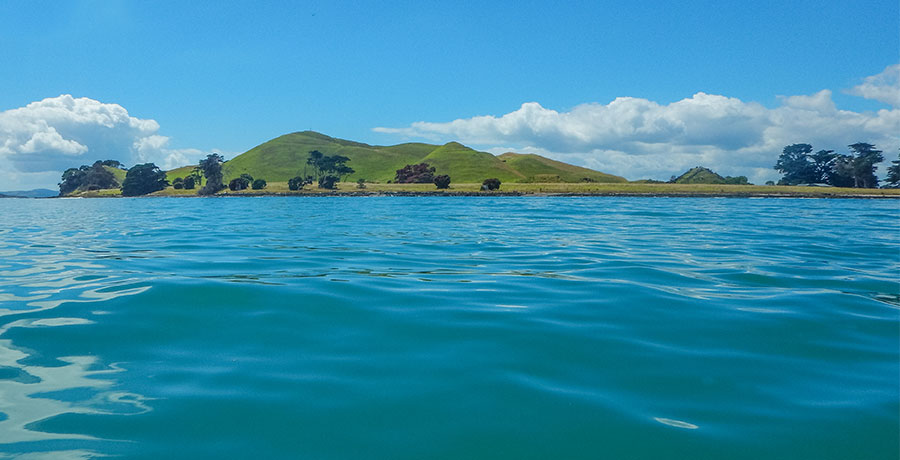 Motukorea’s volcano was formed when the Tamaki Estuary and Waitemata Harbour were forested river valleys. It began life with a series of wet explosive eruptions that cleared its throat of debris and created a 1-kilometre-wide shallow crater. Fire fountaining produced the high scoria cone with its deep summit crater in the centre of modern Motukorea. Motukorea is the only volcano in Auckland where the geological products and landforms of all three styles of eruption – tuff ring, scoria cone and lava flows – can be seen together in one reserve.

The volcanic landscape provided a rich environment for cultivation which was extensively farmed and gardened by Ngati Tamatera who lived on Motukorea for at least six centuries. If you look carefully when you visit you will see a well preserved stone field garden system, fish traps and middens. There were three pa on the island – the largest was on the summit of the main volcanic cone. It is a taonga to Maori with over 65 archaeological sites present on the island.

In 1840 Europeans William Brown and John Logan Campbell purchased the 59.89 hectare island from Ngati Tamatera. They lived in a large raupo whare on the western flats and used the island as a trading base for a few months before moving in to the newly established Auckland township. Brown, after whom the island gets its European name, sold it in 1873, after which the island was farmed by the Featherstone (1879–1903) then Alison (1906–1946) families. The sites of their farmhouses are marked by introduced trees, building foundations and a stone-lined well on the northwestern flat near the stone wharf. Retaining these features are an important part of our history.

The Alisons were principal shareholders in the Devonport Steam Ferry Company, and Motukorea became a popular destination for ferry-loads of picnickers between 1900 and 1940.

Motukorea is also significant in aviation history, with the Barnard brothers of Auckland carrying out what appears to have been New Zealand’s first glider flights from the upper slopes of the cone in 1909.

In 1946 the island was purchased by the Auckland Metropolitan Drainage Board as part of a plan for the disposal of the city’s sewage. The scheme was switched to the Mangere area following a public outcry led by Dove-Myer Robinson. Subsequently, Sir Ernest Davis (Mayor of Auckland 1935–1941) purchased the island and gifted it to the Mayor, Councillors and Citizens of the City of Auckland’ for the purposes of a public reserve in 1955.

The Hauraki Gulf Maritime Park Board managed it from 1967, passing responsibility to the Department of Conservation in 1990.

DOC successfully removed rabbits in 1991 and Norway rats and mice in 2000. The island has remained pest free but there have been instances in recent years of releases of rabbits on the island. DOC’s vigilance picked these up quickly and removed them before they could breed and re-establish.

The removal of animal pests and the control of key invasive weed species is important for Motukorea because it supports populations of New Zealand dotterel and Variable Oystercatcher but also because it is a refuge for one of Auckland rarest native plants – shore spurge – Euphorbia glauca. Also known as waiuatua or sand milkweed this herb has blue grey leaves and dark star like reddish purple flowers.

Weed pests (primarily sweet pea, moth plant, bone seed, pampas and rhamnus) are also present on the island and along with shore spurge recovery, maintaining the islands animal pest free status, shorebird protection and monitoring of lizards form the basis of an ongoing management programme. DOC has been supported in these programmes with funding from Auckland Council.

Recently Auckland Council determined that it would take back administration and management of Motukorea and the island has been mooted as a regional park.

Motukorea will remain in the Hauraki Gulf Marine Park and there will be integrated management with other reserves and islands within the inner Hauraki Gulf to protect and enhance natural and cultural values. The council intends to work closely with mana whenua in the future management of the motu.

The vulnerability of these islands was evident when Motukorea made headlines in November 2016 when a person stranded there set an apparent signal fire that burned out of control and went on to engulf 13 hectares – roughly a quarter of the island. Although the island has healed itself with a new kikuyu cloak it is a salient reminder of the need to work in partnership with the community to ensure that these island taonga are treasured by all.

I urge you to visit Motukorea but tread gently. Consider its past, help Auckland Council protect this unique geological gem, respect its rich heritage and enjoy its native species from a distance. Kayaking around the island, swimming in Crater Bay, walking to the summit are the best ways of experiencing the many treasures that this island holds. It’s a special and unique place.

Jo Ritchie | Jo Ritchie helped start up the Gulf Journal, works as an ecologist for Natural Logic and is project co-ordinator for the predator free Waiheke initiative.