Nicola Macdonald has prepared a whakatauki to welcome home taiko to Aotea.

The proverb is recited as an adult male bird is lifted from its burrow by researcher Elizabeth (Biz) Bell and held tightly across the chest of her husband Paul (Skip) Garner-Richards. They pass between lines of onlookers straddling either side of the narrow path above Great Barrier Island’s Windy Canyon.

It is a powerful incantation. There are ope from Motairehe and Kawa, tamariki from Okiwi School, community figures, fishing company managers, Te Papa Atawhai council and fisheries officers, and environmental group reps, all brought together by Southern Seabird Solutions Trust.

Nicola MacDonald is chairperson of the Ngati Rehua-Ngatiwai ki Aotea Trust, leading the iwi toward its treaty settlement with the Crown. She is also a member of the Hauraki GulfForum; a collective of leaders from central and local government and tangata whenua tasked with care and protection of Tikapa Moana/Te Moananui a Toi (Hauraki Gulf) under the Hauraki Gulf Marine Park Act 2000.

In that role she is keen to see action. Since the Forum published its State of our Gulf report in 2011 warning of the loss of iconic species and ecosystem health—new responses are emerging.
“All seabirds are precious taonga to Ngati Rehua-Ngatiwai ki Aotea people and even more so the tāiko who breed exclusively on our sacred maunga Hirakimata and Hauturu-a-toi. We want to ensure that the last remaining colonies of tāiko are protected to ensure they remain part of our natural heritage and legacy for all future generations of New Zealanders,” says Nicola.

The tāiko or black petrel had been identified as facing the highest risk from capture in commercial fisheries of all New Zealand seabirds. Models suggested it could be being caught 14 times faster than its population could sustain.

Most of the 2700 breeding pairs occupy burrows under forest around the tihi of Hirakimata, Ngati Rehua-Ngatiwai ki Aotea’s ancestral maunga and Great Barrier Island’s highest mountain. There’s a small satellite colony on Hauturu/ Little Barrier but the rest of the tāiko’s former range around the North Island has been lost because of its vulnerability to predators, particularly stoats.

Ngati Rehua-Ngatiwai ki Aotea is party to a Southern Seabird Solutions Trust pledgeded signed to turn around the fortunes of the tāiko. Other signatories are government agencies, environmental groups and fishing companies; all of which now require the 55 long line fishing boats that fish the Gulf to undertake seabird smart training courses, maintain on board seabird management plans and use mitigation devices.

Dozens of fishing boat skippers and their crew have made the long trek up Hirakimata, the highest peak on great Barrier Island, to help Biz Bell and her Wildlife Management International Ltd team with research and monitoring. As a result they have become the birds’ biggest champions alongside Ngati Rehua-Ngatiwai ki Aotea. 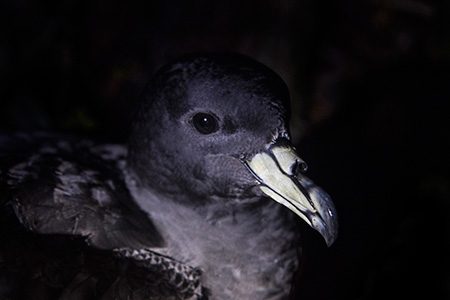 Kaumatua Rodney Ngawaka stands with Nicola and explains the tāiko’s recent return from winter fishing grounds off Peru, their remarkable diving ability (up to 34 metres), their courtship ritual then shared incubation and feeding duties for a single chick that will fledge and leave the island in May.

It is one of a growing number of success stories created through collaboration between resource users, government, environmental groups and iwi.

The Hauraki Gulf Forum has facilitated a three year process involving shipping companies and the Ports of Auckland. It has resulted in a protocol to reduce ship strike of the Gulfs resident Bryde’s whales. In 2011 two whales on average had been washing up dead each year and the average speed of container ships transiting the Gulf was 14.6 knots. The collaborative group discovered the population of 50 odd whales were shallow divers, hard to spot and randomly dispersed through the Gulf. Slowing down was the only practical intervention and today average large vessel speed is 10.9 knots, well on the way towards the internationally recognised target speed of 10 knots,which reduces the chances of strikes and their lethality significantly.

The Forum’s State of our Gulf report had also highlighted the historic loss of important marine habitats of Tikapa Moana, critical for maintain mauri, or the ‘life supporting capacity’ sought by the marine park act.

Kuku or green lipped mussels once carpeted the soft sediments of the Firth of Thames and Tamaki Straight, but when dredged through the first half of last century did not recover on muddy seafloor left behind.

In the past few years mussel farmers have begun working with a community group called Revive our Gulf to repurpose mussels not up to supermarket specs. The deposition of 3.5 million reject mussels has created several new reefs, bringing back filtering power, more abundant fish life and raising interest among iwi. Ngati Whatua Orakei has begun using mussels in their restoration programme at Okahu Bay.

The most ambitious response to the pattern of decline documented in the State of our Gulf assessment is the Sea Change Tai Timu Tai Pari spatial planning process, being overseen by a co-governance group of mana whenua and Crown agency representatives. Two years into its work a stakeholder working group is creating new opportunity for mana whenua to explore ambitions and management potential in Tikapa Moana/ Te Moananui aToi.

Nicola sees Ngati Rehua-Ngatiwai ki Aotea’s imminent treaty settlement and its assertion as kaitiki within bodies like the Hauraki Gulf Forum, planning processes such as Tai Timu Tai Pari and practical conservation initiatives as important steps. “The survival of tāiko – like many issues – requires multiple interventions, starting with policies at central and local government, collaborations between agencies and stakeholders, and support from everyday
mums, dads and families,” she says.

This summer, recreational organisations, fishing clubs and charter companies will be spreading the word on how to fish safely around seabirds while fisheries officers are handing out information and providing other practical advice.

“Together we can turn back the tide and save our precious taonga. He kaitiaki koe—you are a guardian, he kaitiaki au—I am a guardian,” says Nicola.