On the morning of 9th February, Fullers360’s D7 ferry had a very important passenger on board. Sheltered from the excited chatter of 170 daytrippers, a 30-day-old kiwi chick sat nestled into his “Kiwi on the Move” travel box in the wheelhouse, quietly accompanied by the skipper concentrating on safely navigating to another sanctuary, Rotoroa Island.

Fullers360 holds a special relationship with the conservation trusts working to protect the Hauraki Gulf islands. In this case, Rotoroa Island was transporting a Coromandel Brown kiwi chick for a public release event and asked for the ferry company’s help. Rotoroa Island Trust and Fullers360 began spreading the word about this rare, can’t-miss event. There was so much interest, Fullers360 offered to add a second ferry to allow even more people to get up close to our national icon.

“The kiwi population is declining, and the hero organisations saving them have the goal to grow each species of kiwi by two percent every year. Fullers360 wants to do our part to help – the more people we can help get to the island, the more we can help raise awareness and support this mission,” said Fullers360 CEO Mike Horne.

A kiwi chick riding as a makeshift “first mate” to a ferry skipper isn’t an uncommon scene. Fullers360 helps with wildlife releases across the Hauraki Gulf. Thanks to biosecurity efforts and tireless volunteer work, islands such as Rotoroa Island and Motutapu Island are the perfect creche islands for kiwi. Just like humans take our babies to a nursery, Kiwis for Kiwi work with the Department of Conservation, landowners, and community groups to drive the Operation Nest Egg (ONE) programme that places vulnerable kiwi chicks on safe predator-free islands where they can grow big and strong without the threat of rats, stoats, feral cats, or even dogs.

In the wild, kiwi chicks have only a 5% survival rate, but when taken to a creche, their chances increase to 60%. The kiwi eggs come from forested sites in the Coromandel, protected by Thames Coast Kiwi Care. Many are then hatched at the Auckland Zoo. When the chicks grow to reach 1 to 1.2kg and can defend themselves, they’re released back to sites like the Coromandel. There they can live up to 50 years old.

In the wild, only 5% of wild hatched chicks survive to adulthood; stoats are the major culprit. The ONE programme has been very successful over the past few years, with chick survival rates reaching over 99% per year. This plays an important part in meeting the current national target of increasing kiwi populations by 2% per year.

On Rotoroa Island, the crowd gathered as the same nocturnal little chick was lifted from his carrier and into the sunlight to face his admirers. Before he was released to explore his new home, he needed a name. A unanimous vote dubbed him Ivan, after a long-time resident of Rotoroa Island. By complete coincidence, the Thorner family had come to remember their grandfather Ivan, who’d taken part in a Salvation Army rehabilitation programme on the Island and then had returned to work as a carpenter and set an example to other men wishing to turn their lives around. As the “winners” of the naming challenge, the Thorners accompanied the Kiwis for Kiwi handler and Rotoroa Rangers to release Ivan (the bird) to his burrow. What a way to leave a legacy! 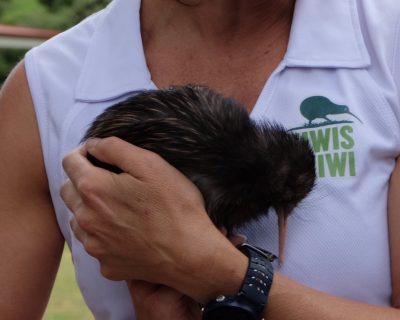 “We’re thrilled to share our kiwi releases with Fullers360 and have the public attend – it’s a celebration of what we can achieve together to help threatened species, by providing predator-free havens,” said Jo Ritchie, Rotoroa Island Trust ecologist.

A series of kiwi releases happens throughout each summer in the Hauraki Gulf, with more expected on both Rotoroa and Motutapu Islands later this season.

Kiwi aren’t the only native species who ride the ferries. In June 2018, Fullers360 helped DOC, Auckland Zoo and the Supporters of Tiritiri Matangi transport other very special cargo, 150 wētāpunga. Hoping to help bolster the population and improve the species’ genetic diversity, this was the fourth release of wētāpunga on the island since 2011 – many of which Fullers360 had the privilege of supporting. 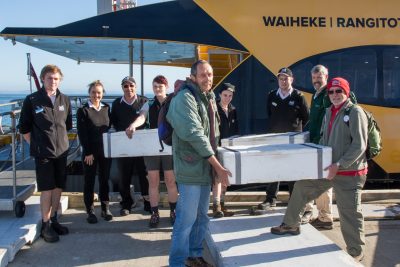 “Fullers360 plays a huge part in that work, getting people and species there, but they do an awful lot more than that,” said Department of Conservation strategic partnerships advisor Julie Kidd. “Under Mike Horne’s leadership, they actively seek opportunities to grow their position in sustainability, conservation, and preservation, which is fantastic, and we’re doing everything we can to support that.”

Beyond the native species Fullers360 helps translocate to predator-free islands, the ferry company provides free and discounted travel to the teams who make this conservation work possible, such as the Auckland Zoo, Department of Conservation and island trusts.

Fullers360 also helps island trusts bring volunteers to the islands for special conservation projects like tree planting days and beach cleanups. As one example, Fullers360 has been providing discounted travel to the Motutapu Restoration Trust’s volunteers for more than 25 years, resulting in around 500,000 trees planted over that time. All of these efforts add up to more than 10,000 free or discounted tickets each year, worth more than $395,000.

“We love helping Aucklanders get out to explore their own backyard – the beautiful Hauraki Gulf. We don’t take our role lightly, and are always finding ways to improve our biosecurity programme to protect the islands we travel to every day,” said Horne.