But, the Minister of Fisheries, Hon. Stuart Nash is proposing several changes to commercial fishing rules.  One of the biggest changes suggested is how fish operators return fish to the sea (alive or dead) if they are undersize, or not the species fishers were targeting.

Under current rules, many fish returned to the sea may not be reported, so the exact number of fish being thrown back is unknown. Reporting this information is important for management decisions, such as setting total allowable catch limits for fish stock. The return of unwanted fish (legally or illegally) is also seen as wastage of the resource and lost economic value.

Fisheries New Zealand is, therefore, looking to amend commercial fishing rules around what fish must be landed and what can be returned to the sea in a commercial catch to ensure that good fishing practice is encouraged and incentivised. The proposal states that the current landings and returns rules are complex, and can be difficult to comply with and monitor.

Changes are also proposed to the penalties regime. Fisheries New Zealand says the current offences and penalties regime is based on a low likelihood of detection, and that penalties are significant regardless of the level of offending.

The proposals from Fisheries New Zealand suggest that electronic catch and position reporting will provide richer information about which fish are caught and where. This information will provide the department with a more comprehensive picture of fishing activity, including illegal behaviour.

In addition, a graduated offences structure will have a stronger focus on the level of offending. That is the level of fish that are illegally discarded. This will allow Fisheries New Zealand to tailor the range of penalties to the level of harm the offending has on the marine environment.

The other areas of reform being proposed are:

The discussion document and information on how to make a submission can be found here. Submissions close on 17 March 2019.

The Minister of Fisheries anticipates decisions arising from the current consultation will result in the development of new legislation later in 2019. 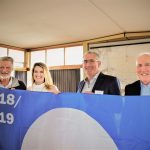 The Outboard Boating Club in Hobson Bay is proving that marinas and boat clubs can make a big difference to their ... more