How often have I driven past a weedy section of road verge within an otherwise pristine environment and thought “Someone should do something about that”? Too often, I’ve now realised, since it took some time before I thought that this ‘someone’ might as well be me.

Isn’t it strange how commonly thought it is that if ‘something’ does not happen then it’s simply through lack of funding? Why do we always look solely to the public purse for all our conservation solutions?

This new approach of public/private partnerships that DOC has recently heralded is refreshing, a reminder that as both taxpayers & private individuals we all have a vested interest in the public estate.

The conservation work that I had identified locally was so small & so remote that as a one-off job it was never going to be on the council radar and to be fair, it would warrant a very low priority.

Waiheke’s marine reserve is handsomely bush-lined for the most part, apart from a short section where the road runs alongside the mangroves. This road was pushed through Te Matuku in the 1960’s and for the most part native cover has recolonised the scars. 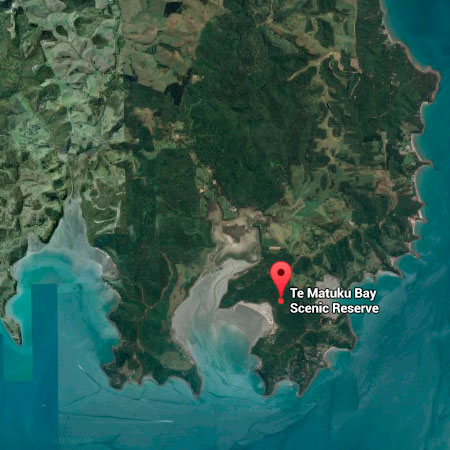 A small section of verge between mangrove & road has never managed to natually revegetate in that half century period, and instead continues to host woolly nightshade, inkweed & gorse. Abutting the marine reserve & adjacent to another reserve; an area of high amenity & environmental value.

Having the urge to ‘do something’ is only half the formula, the other is working out how to start. A private individual weed-whacking on a roadside is going to be noticed, even early on a Sunday morning, so I concocted a method by increment.

I did not want this initiative to be touched by the dead-hand of bureaucracy, having seen how endless meetings & agendas can so easily kill off motivation. Volunteering is a concept I have not always seen treated respectfully by those in authority. Time is often donated freely to begin with, but once goodwill is burnt off by a bad experience it often cannot be reignited.

Such innocent stuff, yet at the time I surely felt I was about to commit some form of crime. What if someone saw me? What complaints might be made? Why am I putting my neck out there?

So I did just a little, then advised Council of my first discreet activity & future intentions. Actually this weed work was not on the main road verge but instead was removing an inkweed forest from an adjacent, & otherwise weed-free, reserve.

My second ploy was to clear the overhanging branches along the road verge next to the weed patch to allow walkers to safely remain off-road. Actually, the kanuka & manuka trimmings made great slash to cover up bare earth revealed once I did start on the serious weeds, an excellent byproduct.

With my actions endorsed I then was able to move on to the area that triggered this mini project. I guess you could describe my actions by now as ‘self-supervising’. Interestingly not one of the many cars that passed by while I was weed whacking stopped, either to investigate or indeed to offer some help!

Working through the gorse & woolly nightshade I actually found evidence that the area had been cleared, presumably by Council some years previously, by chainsaw given the size of the branches on the ground. Yet with no timely followup the current crop of weeds was now thicker than ever.

I can see that I will be keeping an eye on this spot for some years to come.