Engaging business for the betterment of the Hauraki Gulf

There’s a kiwi in the wheelhouse

Fullers360’s role in moving precious cargo throughout the Hauraki Gulf

A comprehensive new book on the challenges for seabirds 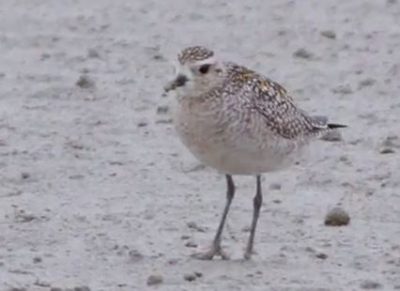 Where does the pacific golden plover – the kuriri – come from?

The shores of Miranda, in the Firth of Thames, are the part-time home to the kuriri. The fourth most common of the Arctic migrants that visit each summer, the kuriri used to arrive in their thousands each year to escape the Northern Hemisphere’s winter. Now, fewer than 200 visit. Why the numbers coming to New Zealand have declined is a mystery, as is much about the birds’ life.

Each year the small birds migrate to somewhere near the Arctic Ocean to nest. It’s not known whether this is Siberia or Alaska, what route the birds take to get there or if and where they might stop on the way. There’s speculation a habitat they might use as a stop-off point might be degraded.

This summer the Pūkorokoro Miranda Shorebird Centre is going to try to find answers to fit 10 of the birds with tiny GPS trackers to see where they go. $20,000 was raised for ten lightweight GPS trackers. With permission from the Department of Conservation and Massey University Animal Ethics Committee, the notoriously flighty birds have been successfully tagged. 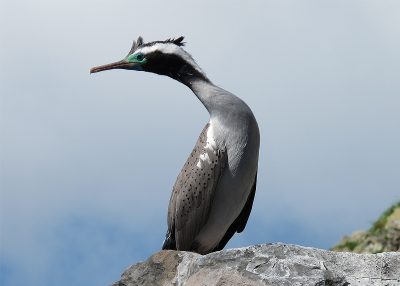 Attracting Spotted Shags back to the Noises

In an attempt to attract Spotted Shags back to the Noises group of islands, a replica colony of Spotted Shags has been installed on the steep cliff face of Otata Island – the largest of the Noises group. The replicas were made from six Spotted Shag specimens in the Auckland Museum’s collection, that were collected by Museum staff from the Noises back in 1913.

The Museum’s specimens have been scanned, 3D printed and painted. As well as the replica birds, nests have been constructed from dried seaweed and a solar-powered sound system installed to transmit bird calls.  White paint has been used to mimic the droppings that mark seabird colonies.

Damian Christie from the Aotearoa Science Agency was on hand to film the installation.

You can also watch Auckland Biodiversity ecologist Tim Lovegrove and Auckland Museum’s Matt Rayner take part in an annual survey to monitor the threatened populations of Spotted Shags in the Hauraki Gulf here.

Dive into Seaweek 2019 from this weekend

Seaweek 2019 kicks off this Saturday, 2 March. There is plenty on offer, with some 200 events, including more than 50 in Auckland, 40 in Wellington and 30 in Hawkes Bay, plus six competitions. So dive in, visit the website seaweek.org.nz and check out the events near you!

National Coordinator Dr Mels Barton is delighted at the response to this year’s Seaweek:

“We are getting more groups organising events every year, and many more repeating events year after year. It’s great to have so many opportunities around the country for families to learn about the amazing marine environment we have in New Zealand and how to protect it.”

The theme of Seaweek this year is “Tiakina o Tātou Mōana – Care for our Seas”.

Voting for the 2019 Senior Seaweek Ocean Champion closes today (Friday 1 March) and the competition is intense. The winner of the award, sponsored by the New Zealand Coastal Society, will be announced at the Bill Ballantine Memorial Lecture: Changing Ecology in a Changing Ocean on Thursday 7 March at the University of Auckland.

Cawthron Institute and Sustainable Seas Science Challenge scientist Heni Unwin will be on tour around the country during Seaweek, telling communities about her marine plastic tracker model at a number of interactive events.

Schools can learn all about stormwater with the Tread Lightly Drain Game at SEA LIFE Kelly Tarlton’s all week.

To coincide with Seaweek, the annual Hauraki Gulf Marine Park Poster is available in today’s New Zealand Herald (Friday 1 March). Beautifully illustrated by Dave Gunson, with graphic design by Shaun Lee, this year’s poster shows you the outline of the 1.2 million hectares of the Marine Park. It’s a lot bigger than most people think! 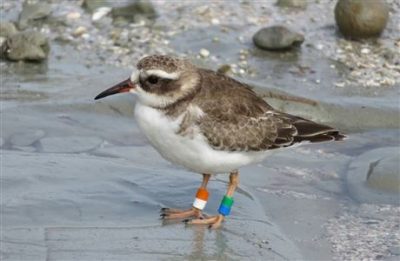 Endemic to New Zealand, the shore plover / tūturuatu were once widespread around the coast of the North and South Islands but were driven to the brink of extinction by rats and other introduced predators.

In 1990 there were only 130 shore plover / tūturuatu All these birds were on one island, predator free Rangatira Island in the Chatham Islands.

Today the total population of shore plover / tūturuatu in New Zealand is around 245. Shore plover were first released on pest-free Motutapu in 2012 – a year after Motutapu and neighbouring Rangitoto were declared pest-free.

Read more from DOC and also from the Pūkaha National Wildlife Centre. 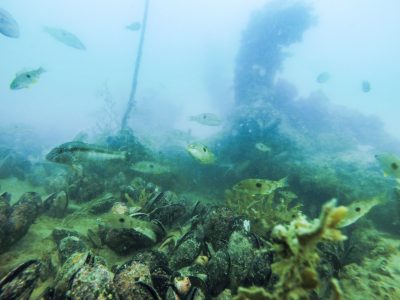 As reported frequently in the Gulf Journal, shellfish beds are vital to marine ecosystems. They filter and clean the water, stabilise the seafloor, dampen the effects of storm surge, enhance biodiversity, and remove nutrients that run off the land.

This newsroom article by Professor Simon Thrush, Director of the Institute of Marine Science at the University of Auckland, calls for urgent research to inform targeted restoration activities, as well as more coordinated partnerships of current restoration efforts. Professor Thrush urges, however, that scientific knowledge alone will not secure the success – community participation and commitment are critical to ensuring the long-term success and sustainability of restoration. 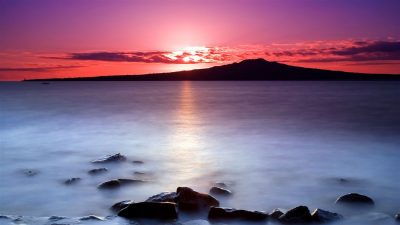 Auckland iwi Ngāi Tai ki Tāmaki has unveiled tourism aspirations which include biking tours and accommodation on Mototapu Island. In mid-January, the iwi signed a conservation relationship agreement with the Department of Conservation, which confirmed their role as mana whenua in influencing policies, looking after the whenua (land) and taonga species, providing visitor information and protecting waahi tapu (sacred sites). They currently hold a concession to conduct commercial tours on both Rangitoto and Motutapu. The agreement was part of last year’s Ngāi Tai ki Tāmaki Treaty of Waitangi Settlement.

Last year the Supreme Court heard challenges by the iwi to ferry and tourism concessions granted by DOC. The Court confirmed the iwi as kaitiaki over the motu, with the Court saying that the rohe of Ngāi Tai ki Tāmaki extends across Tīkapa Moana/Hauraki Gulf and includes the ancestral motu of Rangitoto, Motutapu, and Motu-a-Ihenga (Motuihe), with which it has deep and long-standing connections.

Sea Change – Tai Timu Tai Pari was the first of its kind in New Zealand – a bold initiative to create a marine spatial plan. The Office of the Auditor General (OAG) decided to see what lessons could be learned from this ambitious undertaking. They looked at how the agencies involved set up the project and prepared the plan, including a focus on the project’s governance arrangements and planning for implementation.

The OAG says that “in many ways, the project was a successful example of a stakeholder-led collaborative approach. It resulted in a completed plan with general support from those who prepared it. However, the plan is not easy for the agencies to implement and those involved in the project are frustrated at the lack of progress in implementing the plan. Our report identifies aspects of the project that if done better would have made implementing the plan easier, including improving stakeholder engagement and better planning for implementation.”

The report can be found here. 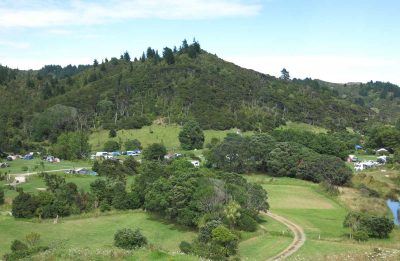 Northern Coromandel campgrounds get a makeover

Waikawau Bay Campground in the Coromandel will be closed from 1 March to 30 June 2019 for a $2.1Million upgrade on water facilities

The 1250 camper capacity campground will be closed to the public while 10 new ablution blocks, complete with point taps, showers, and sink benches are installed. They will be fitted with automatic shut-off type tapware. The upgrade will conserve water usage by up to 60%.

DOC is upgrading a number of Northern Coromandel campgrounds. The investments, which include new facilities, will improve campers’ experiences and accommodate the influx of visitors to the region over the busy summer season.

Operations Manager Nick Kelly says “the new facilities have been designed to conserve water across the campground. The measures not only reduce the amount of water waste but also encourage visitors to drink the drinking water on site rather than bringing in bottled water. The empty bottles usually end up in local waste stations.” 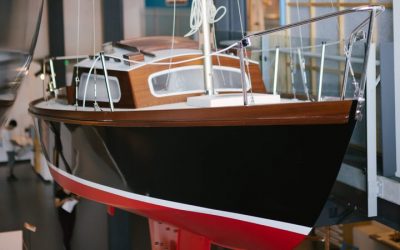 A humble handmade boat that helped launched the yachting career of Sir Peter Blake has a new home at the New Zealand Maritime Museum. Sir Peter, with his brother Tony, built the 7-metre keel yacht named Bandit in the backyard of their Bayswater family home in 1966, when Sir Peter was just 17.

Bandit was one of the vessels Sir Peter learnt his craft on Auckland’s Hauraki Gulf as a teenager, winning several Auckland sailing competitions in the summer of 1968 when they eventually got it out on the water.

He went on to have one of the most celebrated sailing careers in New Zealand’s history – including winning the America’s Cup in 1995 and successfully defending it in 2000 and circumnavigating the globe six times. 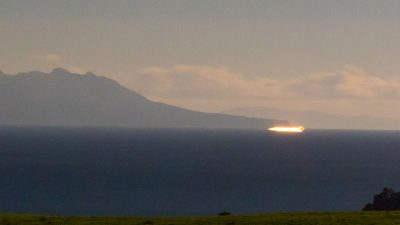 In a dramatic incident in the Gulf last year, about 60 Buller’s Shearwaters ended up on the deck of a cruise ship after being attracted by the vessel’s bright lights. Some of the birds died because they were placed in boxes together and became distressed. Regrettably, 33 died and several were injured.

Since then, the Department of Conservation (DOC) has been consulting with international cruise companies and the NZ Cruise Association on how to keep the birds safe. Advice has now been distributed to cruise ships  when they sail into NZ ports.

In advice to ships, DOC urges those on ships to close blinds and curtains on cabin windows, reduce unnecessary exterior lighting, and to try to shield essential external deck lights so they are directed downwards and to reduce light wattage where practical. 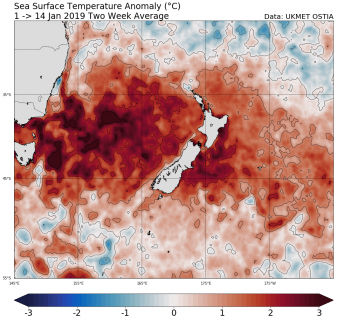 The seas around New Zealand in 2018 were the hottest on record. In late January 2019, NIWA scientists published a report showing that water in the New Zealand region is significantly warmer than it was 30 years ago, and all indications are the warming trend will continue. A record-breaking marine heatwave last summer was the key driver of 2018’s hot temperatures, with parts of the Tasman Sea at times as much as 6C higher than average.

The results have been published in the New Zealand Journal of Marine and Freshwater Research.

The alarming statistic also coincides with NIWA reporting in its Annual Climate Summary that 2018 was the second-equal hottest year on record.

NZ Herald Reporter Michael Neilson reported on some of the stark threats to marine life and New Zealand’s seafood sector in his article here. 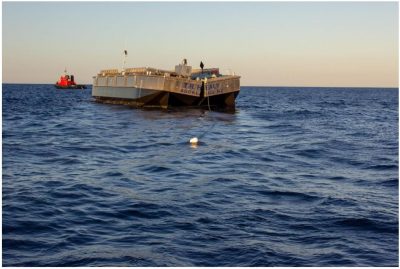 The company already has permission to dump 50,000 cubic metres of sediment at the disposal site – known as the Northern Disposal Area, 25 kilometres east of Great Barrier Island.

It applied in June last year to expand its operation.

Coastal Resources Limited dredges material from sites around Auckland and Waikato, including marinas.

The EPA received 76 submissions about the application and the vast majority of them opposed the granting of consent, with opponents including the Great Barrier Local Board and the Department of Conservation.

In its final decision, released 5 February 2019, the EPA’s decision-making committee said that any potential adverse effects on the environment of any disposal would be restricted to the disposal area and were negligible beyond the boundary.  Further, any potential adverse effects on existing interests, such as commercial fishing, would also be negligible beyond the boundary.

Coastal Resources Limited will have to carry out regular environmental monitoring of the dumping site and any biosecurity risks will have to be notified to authorities within 48 hours.

More details can be found on the EPA’s website.