As birds welcome dawn around the islands of the Gulf, there’s a similar ‘salty dawn chorus’ happening beneath the waves.

The deployment of six New Zealand designed hydrophones around the Gulf has enabled University of Auckland PhD candidate Rosalyn Putland to document daily, lunar, and seasonal cycles and provide a new perspective of our marine environment.

Urchins crackle and crunch in the background at dawn and dusk when they feed on the rocks. John Dory and gurnard grunt and growl, while schooling reef fish produce pops and clicks as they move from their daytime refuges to feed at night. Dolphins chatter away at all times with Bryde’s whales moaning in the background.

“The whales were a great sound to hear – they have a really low moan and appeared frequently, probably more than we first thought they were going to,” says Rosalyn.

The thump of gannets hitting the water from height and their chatter while feeding is a sound that drives patterns of life around the Gulf. The pioneering study collected 500,000 minutes of sound over the eighteen months of deployment and recorded biological, geological and human generated sounds. Over the three-year period, Putland recorded two out of every 20 minutes and used computer models to process the enormous amount of data.

Wind, waves and rain could be heard tens of metres below the surface. An unexpected surprise was the low rumble of earthquakes, which the GeoNet database confirmed as earthquakes up to 750km away.

Human-generated sound is emerging as a concern in some of the world’s busiest waterways. The recent initiative to slow shipping vessels to avoid whale strike in the Gulf will also have helped to quieten the soundscape.

Rosalyn describes the soundscape as an orchestra, with a high variety of noise correlating to ecological niches and good health.

“It’s a quiet embayment relative to a lot of places around the world, and we wanted to establish what is happening now ahead of any future developments. Very little sound data has been collected in New Zealand and it’s been via short-term studies, so it was nice to create this baseline, with seasonal and annual variations.”

The research has been published in Nature magazine. Rosalyn’s supervisor Dr Rochelle Constantine described the work as ‘taking the pulse of the Gulf’ in her talk Finding What’s Where, delivered at the 2017 Hauraki Gulf Marine Park Seminar.

Meanwhile, Massey University’s Coastal-Marine Research Group has created a photographic database of 72 Bryde’s whales to have visited the Gulf over eight years. Led by Dr Gabriela Tezanos-Pinto, individuals were identified by fin markings. Twenty whales were found to have returned to the Gulf every year adding site fidelity information to population estimates gained from aerial surveys. The results were published in Endangered Species Research. 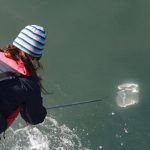 A team of researchers including Assoc. Prof. Rochelle Constantine and ... more