State of the Gulf – Tom Trnski

State of the Gulf – Dan Hikuroa

What has been done – Rebecca Barclay

The Next Generation – Young Ocean Explorers 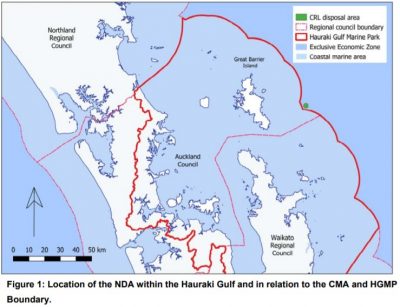 In the last edition of the Gulf Journal, we reported that the Environmental Protection Authority (EPA) had granted Coastal Resources Limited a 35-year marine consent to dispose of not more than 250,000 cubic metres of dredged sediment each year at the site identified in the map below.

Two appeals have since been lodged against the EPA’s decision with the High Court in Wellington, from the Society for the Protection of Aotea Community & Ecology and Great Barrier Islander Kelly Klink, of iwi Ngāti Rehua-Ngātiwai ki Aotea.

Representatives from the Great Barrier Island Environmental Trust presented to the Hauraki Gulf Forum on 20 May, citing biosecurity risks, risks for marine mammals, risks of premature discharge from barges and cumulative effects as major concerns. The Trust is urging agencies to truly consider how dredge spoil can be managed without such high risks to, and impacts on, the Hauraki Gulf Marine Park, marine mammals and islands, and how alternatives to marine disposal can be properly explored and fast-tracked.

The presentation from the Great Barrier Island Environmental Trust will be available soon along with the minutes from the Forum’s meeting. Keep an eye on the agendas and minutes page.

New Zealand Herald has also reported on this story. 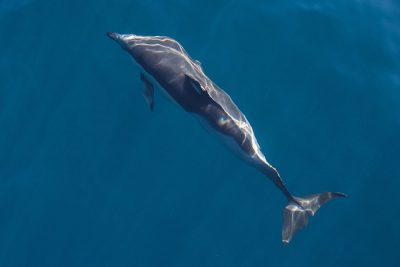 An area of South Island coast and ocean the size of Auckland is being tagged for protection under a proposal supported by Minister of Fisheries Stuart Nash and Minister of Conservation Eugenie Sage. The Ministers have decided to progress a comprehensive marine protection network in the south eastern South Island and will soon consult on the plan which covers 1,267 km2 and includes 18 of the 22 coastal habitats in the Forum area, seven of 12 estuarine habitats and two biogenic habitats. The Department of Conservation and Fisheries NZ plan to release a document for public submissions later this year.

More information about the proposed network can be found on the Department of Conservation’s website here.

The network is somewhat emblematic of what the Hauraki Gulf Forum is seeking to achieve with its recent announcement to recommend that 20 per cent of the Marine Park be protected.

Under current legislation, there are several tools available for marine protection. One such tool is a rāhui, which is a temporary ritual prohibition, designed to preserve the cultural, ecological and physical environment.

On 14th February, Te Whanau ā Rangiwhakaahu Hapū, led by chairman Aperahama Edwards, announced its intention to place a rāhui over the Matapouri Mermaid Pools in Northland, also known as Te Wai O Taniwha. The pools can draw thousands of visitors to the Northland coast every weekend. The iwi has put a rāhui tapu in place due to the damage caused by tourists leaving behind rubbish, urinating and sunscreen. 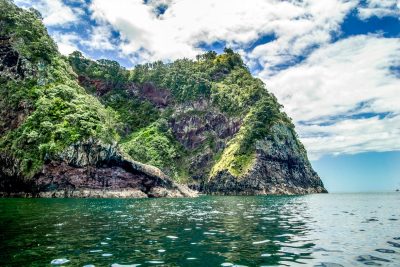 Predator free islands may support the halt of biodiversity loss

Notwithstanding the devastating picture painted by the landmark report from the Intergovernmental Science-Policy Platform on Biodiversity and Ecosystem Services (IPBES) in May, a team of international researchers have found that if predatory mammals could be eradicated from 107 islands around the planet, it would protect 80 threatened species and help reach a United Nations Environmental Programme goal to halt biodiversity loss.

Of the 107 islands identified, five of those were in New Zealand: Great Barrier Island/Aotea and Kawau Island and Slipper Island in the Hauraki Gulf, Motukawanui Island in Northland, and the subantarctic Auckland Island.

University of Auckland conservation biologist Dr James Russell, who contributed to the study, speaks to Jamie Morton about the study here.

The UN report can be found here.

2020 State of the Gulf Report gets underway

The Hauraki Gulf Forum is required to produce a State of the Gulf report every three years. The next report is due out in 2020. The Forum will shortly be seeking proposals for the project, which will for the first time see a Lead Author and Lead Te Ao Māori Advisor working hand in hand.

Please get in touch with the Forum’s Executive Officer, Alex Rogers by 14 June if you or your organisation might be interested in tendering. 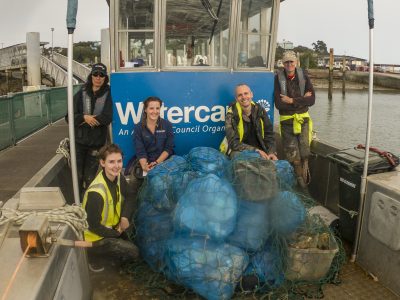 The Outboard Boating Club of Auckland and coastal cleanup specialists, SeaCleaners, are inviting volunteers from schools, clubs and groups all around the area and beyond to help remove rubbish, that has collected over the years in Hobson Bay and its adjacent Purewa Creek. The cleanup event is taking place next Sunday morning, 9 June 2019 (weather permitting).

“Hobson Bay has been described as ‘the jewel in Auckland’s waterfront crown’ and with the help of volunteers from schools, scouts, girl guides, and other members of the local community we want to help restore the bay to its previous pristine state,” says Bill Berry Commodore of the Outboard Boating Club.

The Club have chosen the date and time – 10.00 am to 1.00 pm – because of the favourable tides that will allow the best access to collect rubbish during the clean-up which will be followed by a barbeque at the clubhouse and prizes donated by businesses at the local Orakei Bay Village.

Volunteers are asked to gather at the Outboard Boating Club clubhouse 7 Tamaki Drive at 9.30 am for briefings on designated targets. Bring gloves, lace-up shoes or boots (gumboots not recommended).

Please RSVP your interest in participating in the event to erin@obc.co.nz ASAP.

The Hauraki Gulf Forum is aware that cleanups are occurring all the time in and around the Gulf. The Forum is looking at a way to feature all the various cleanups in its future communications. 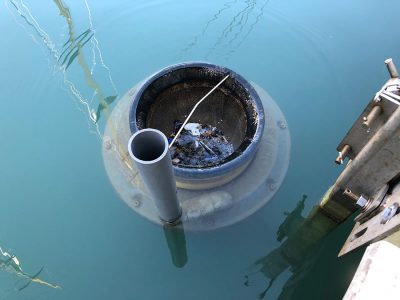 Man-made litter is a ubiquitous and widespread issue for the Hauraki Gulf, as it is globally. Australian company, Seabin, have designed a floating device for use in marinas, yacht clubs and ports to reduce the litter in the marine environment. Viaduct Harbour has invested in a Seabin and it’s already starting to pay off with significantly cleaner water and optimised labour costs. Each bin can hold up to 20kgs of debris. Check out what Caleb Bird, an Ambassador from Viaduct Harbour has to say about how frequently they have to empty the Seabin…

NZ INVESTING IN SMART SOLUTIONS FOR CLEANER WATERWAYS. Please shareMeet Caleb from Viaduct Harbour marina. Caleb has been keeping the busy marina clean for the last 10 years, hear what he has to say about the importance of maintaining cleaner waterways.Seabins will arriving in Australia at the end of the month! We are super excited and we will start distribution mid February for both Australia and New Zealand!To learn more or order a Seabin please visit www.seabinproject.com 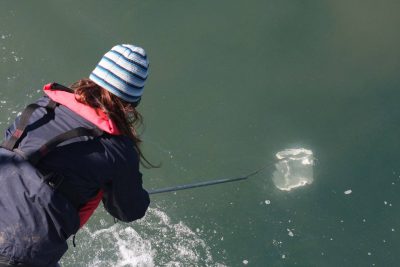 A team of researchers including Assoc. Prof. Rochelle Constantine and Prof. Mary Sewell from the University of Auckland, Dr Richard Newcomb from Plant and Food, Dr John Zeldis from NIWA and Dr Emma Carroll, Senior Research Fellow and Rutherford Discovery Fellow have spent more than two years collecting poo samples and zooplankton samples from Bryde’s Whales in the Hauraki Gulf. They then used a DNA “barcode” approach to identify different types of prey found in the whale poo. Prof. Constantine says “It’s important to discover which type of plankton the whales are eating because we know climate change is affecting plankton productivity. If the type of prey the whales eat becomes scarce in the Gulf, then the whales may move away. This has happened elsewhere in the world.”

The research paper was published in Nature.
You can read NZ Herald Jamie Morton’s article for an overview.
And Auckland University’s press release here. 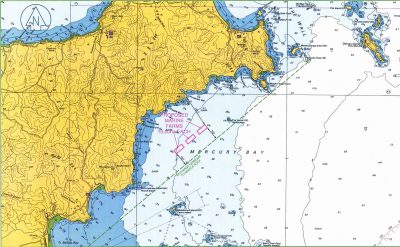 A 30ha mussel spat farm approximately 1.6km from the coast between Whauwhau Beach and Matapaua Bay in Mercury Bay is on the cards. If it eventuates, it would be the first large-scale commercial aquaculture operation on the east coast of the Coromandel Peninsula. Ngati Hei has lodged a resource consent application with the Waikato Regional Council. Read more here about the application, and what the applicants and others have to say about it. 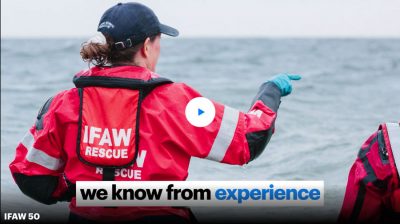 The International Fund for Animal Welfare (IFAW) was involved in setting up the Bryde’s Whale Ship Strike group, and to this day, continue to support the protection of the Bryde’s Whales in the Hauraki Gulf by undertaking daily monitoring of ship movements. They report on this quarterly to the Hauraki Gulf Forum. Now in its 50th year, IFAW’s work spans across more than 40 countries, which is a far cry from how the organisation began. A shout out to IFAW for your valuable work. Kia kaha! Read more about IFAW on their website.